Previously: Newly-turned vampire Elliot Marshall has been challenged by Vladislaus Straud to build a clan consisting of the most powerful families around. Vladislaus has named Geoffrey Landgraab, Bella Goth, Lily Feng, Max Villareal, and Judith Ward as required members, of which Elliot must turn three before his rival, Miss H does. Although the Landgraabs recently died from a terrible pufferfish accident, Elliot has found a rare opportunity to potentially bring them back.

As Jade sprinted into the night in Oasis Springs, back at Forgotten Hollow, Miss H was not sprinting anywhere at all. This being despite Caleb’s numerous warnings that she really should get herself to the Goth house to intercept Elliot’s. His attempts to win over Max Villareal and the youngest member of the Goth family could prove disastrous to their cause. But Miss H, as she always did, paid Caleb no mind and focused her attention instead on a curious visitor who had shown up on her front door. 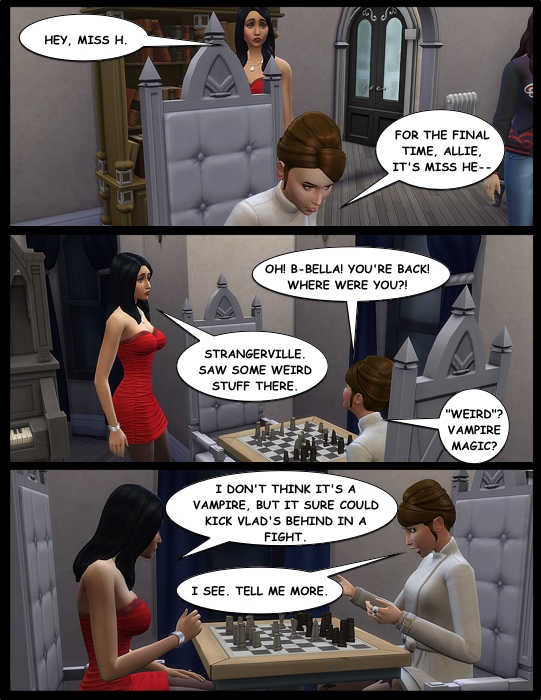 Miss H took Bella into a separate room, not caring to involve her newest offspring. She was more than a little uncomfortable to hear Bella’s story. Even more uncomfortable when she informed her that this strange new creature had also gotten its tendrils into Oasis Springs’ person of influence. This was proving a most difficult area to gain control of. Exactly how far down the line of successors did she have to go?

But…she couldn’t despair. She had vital information her rival did not. In the long term, this could only help her. She and Bella existed the bedroom into the foyer, where Caleb and Allie were waiting. 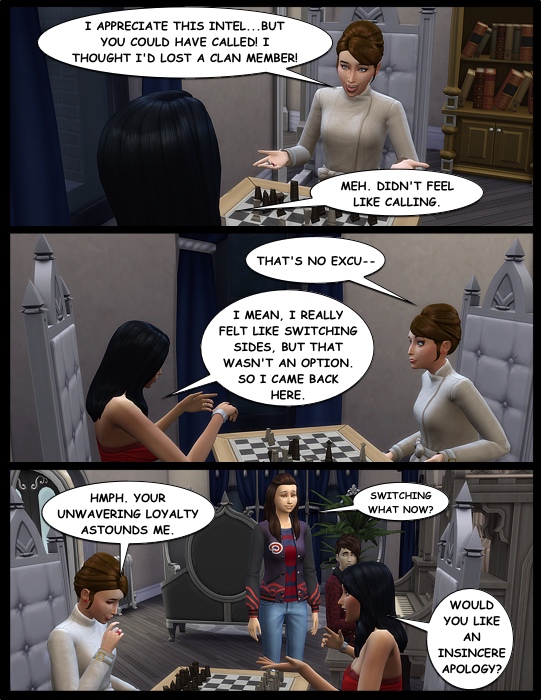 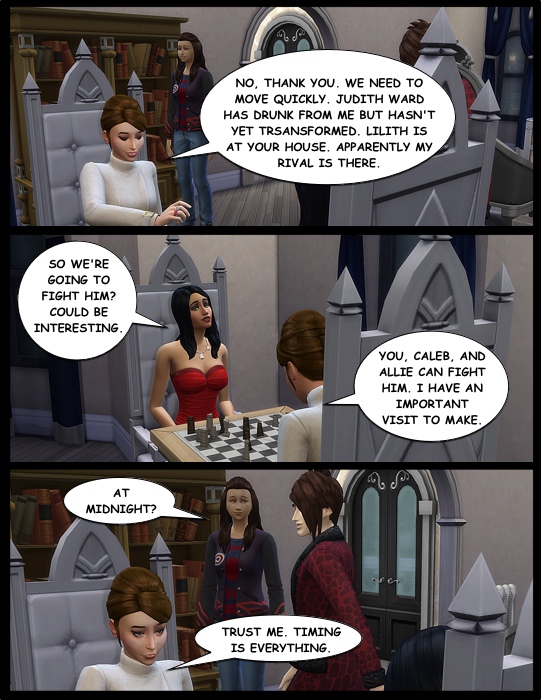 Caleb and Bella exchanged glances. They both held the attitude that Miss H was not nearly as good a planner as she thought she was, nor did either of them ever go out of their way to fulfill her orders with urgency. In fact, Caleb would have preferred to ignore them completely this time. Lilith would be furious when they showed up master-less, and he didn’t feel like getting chewed out. Then again, he would get chewed out for not showing up later, so he might as well get it over with.

Allie asked Bella if anything exciting had happened while she was away. She sighed dramatically and said that yes, of course it had, but only to others. Never to her. Her best hope was that some of the excitement would make its way here into Forgotten Hollow for her to enjoy.

Caleb and Allie both nodded slowly as they hurried to catch a cab to Willow Creek. 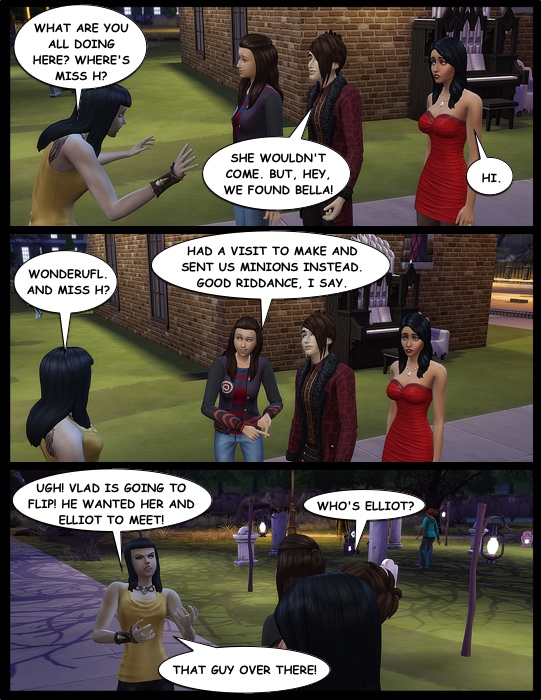 Lilith jabbed a finger in the direction of the Hollow Slough Bar, where Elliot was chatting up a most unexpected visitor. Along with other ghosts in the area, the Landgraabs had found the bar behind the Goths’ mansion suited their otherwordly tastes to perfection. They gleefully chatting up the victim of the unknown giant plant and the mediocre athlete who had attempted to swim in a fenced-in pool. Elliot’s heart would have been pumping wildly as he approached…if it still did that sort of thing. 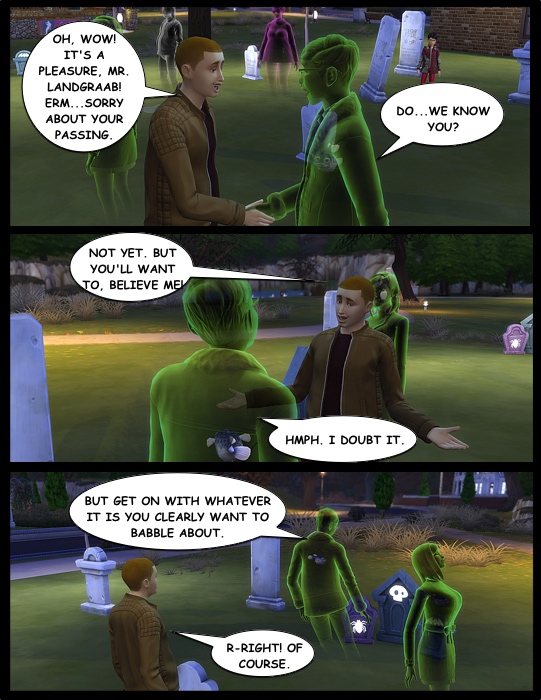 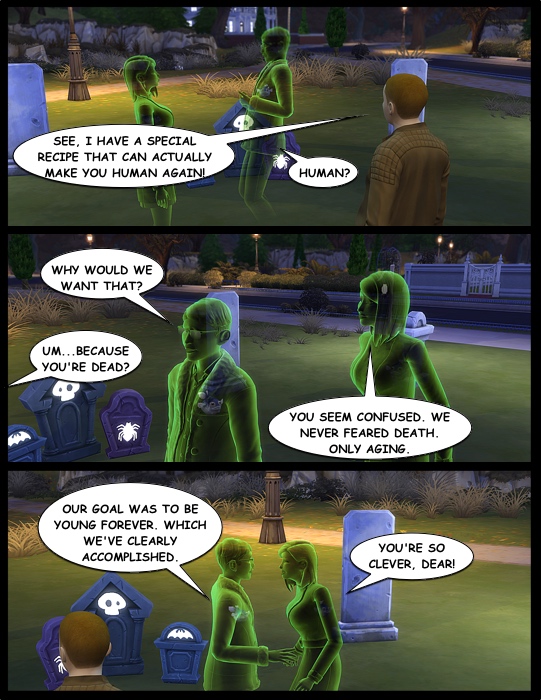 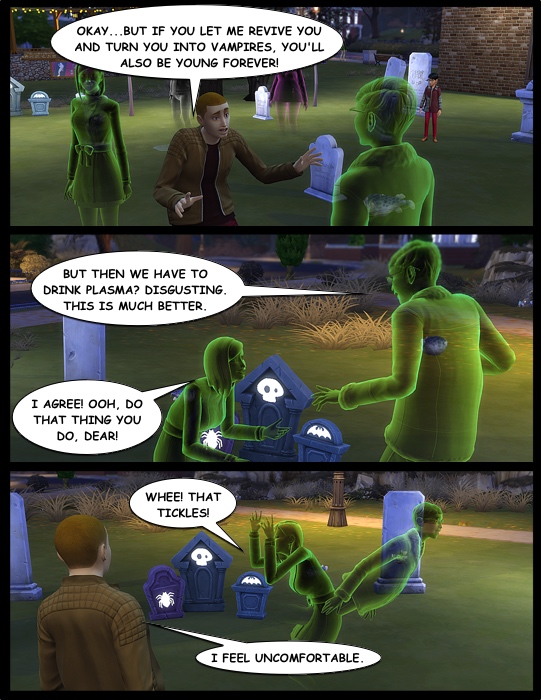 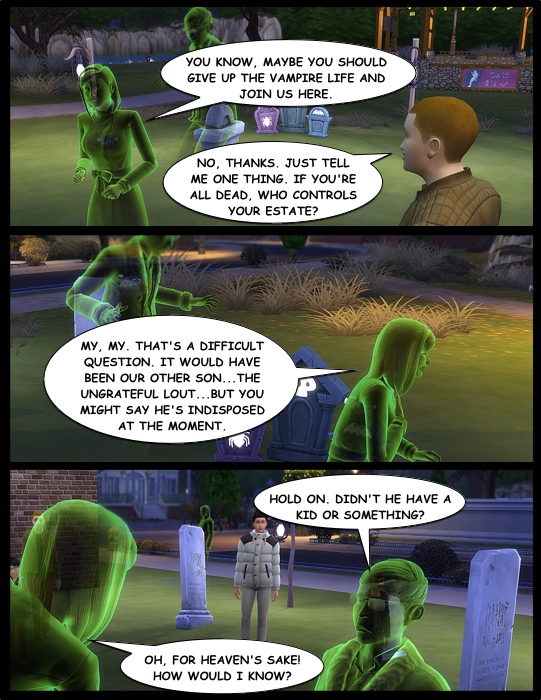 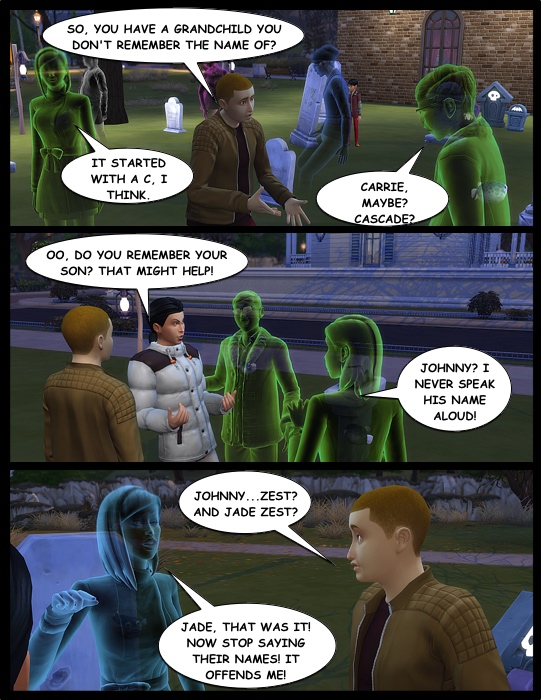 Elliot complied with their request. In fact, he said nothing else to them at all as he took off towards Oasis Springs. If Jade Zest was indeed in charge of the Landgraab fortune now…if she was the area’s new person of influence…she would be a prime target for Elliot’s rival.

Elliot did not know much about his rival yet. He didn’t even know much about his rival’s offspring yet. From the little information Vlad had given him, he only knew she was named Gertrude, and she was incredibly competitive. He got the distinct impression she didn’t care too much about the welfare of her offspring, only that she had them. If that was the case, he didn’t trust her to look out for Jade even one bit. He had to get to the girl first. And hopefully find out what had happened to her father, too.

Of course, unbeknownst to Elliot, he was headed for an empty house. Jade had run to the Desert Bloom Park, still clutching her birthday cake in her arms. She settled down by a bush in the darkness, watching the little flames flicker and dance on the ends of the candles—as if, like her, they wanted nothing more than to leap into the air and fly away.

If Elliot had been in the park in that moment, he would have seen his worst fears confirmed. His rival had indeed discovered who the missing family of influence was in Oasis Springs and tracked Johnny Zest’s daughter down… 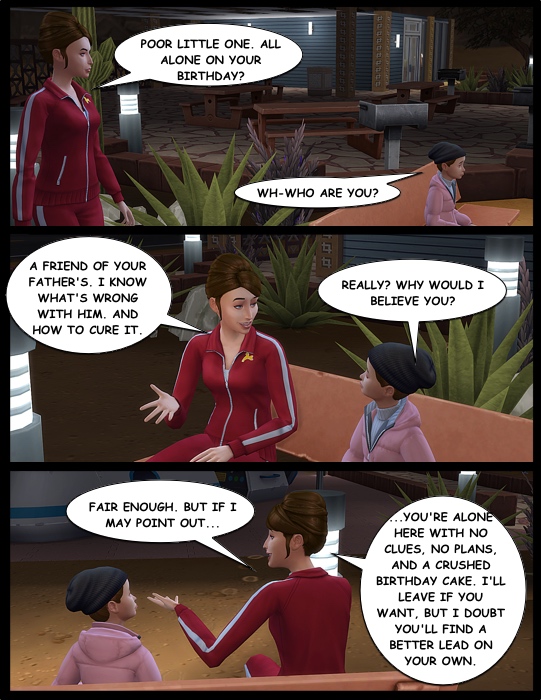 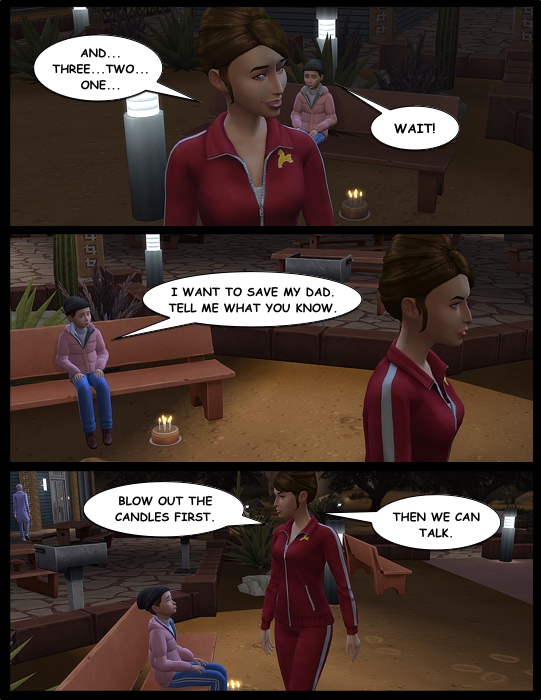 Jade looked between the strange woman and the now somewhat lopsided cake at her feet. Then she picked the cake up, inhaled as deeply as she could, and snuffed out the array of candles with a single, dramatic breath.

2 thoughts on “Clanbuilding for Dummies, Chapter 16”