While Lexi was quite excited for her new life to begin, she soon came to the unfortunate conclusion that it did not share her enthusiasm. 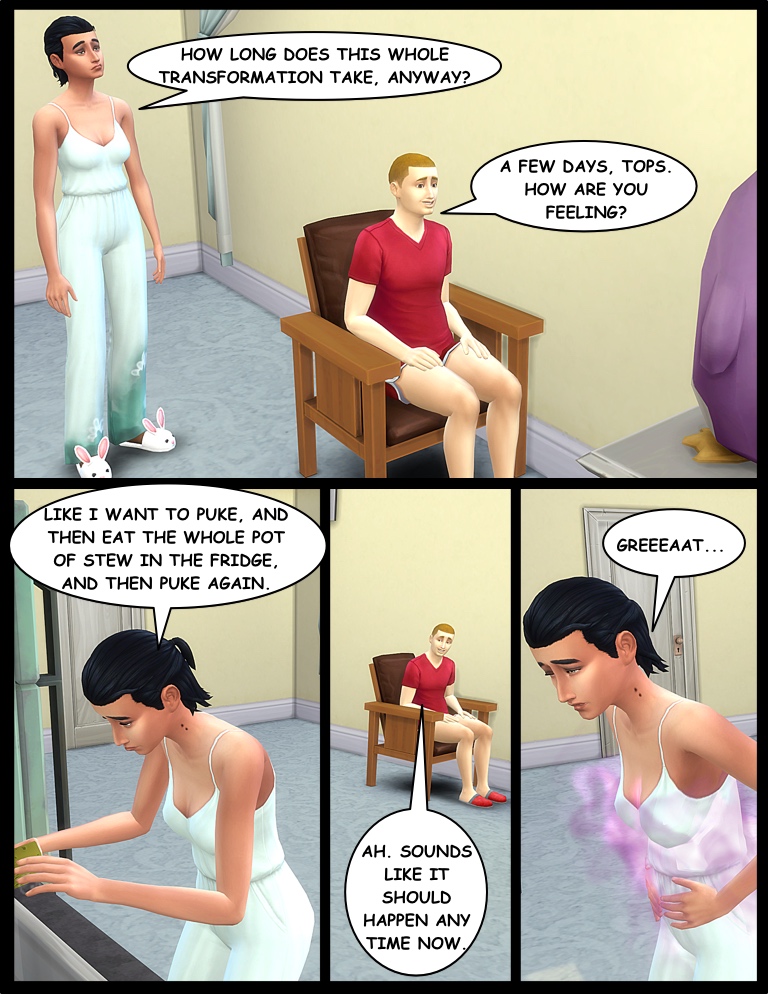 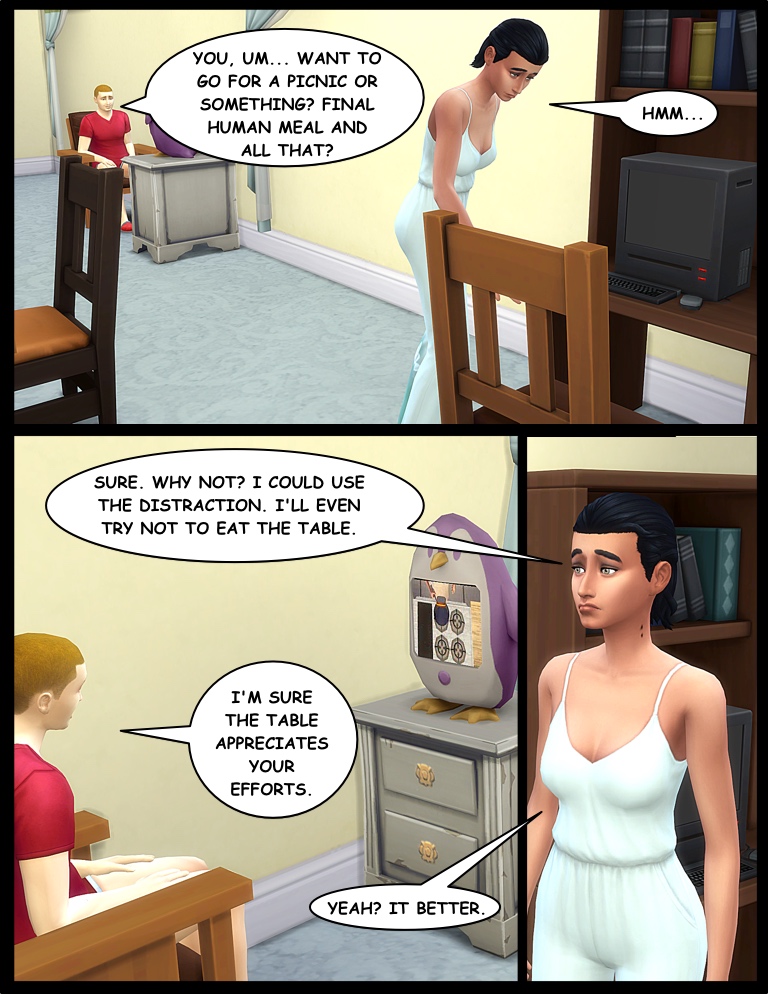 And thus, armed with some of Lexi’s freshly grown fruit and an impressive sun-blocking umbrella, Elliot and Lexi headed outside.

Lexi naturally expected that given Newcrest’s lack of any interesting landmarks, they would most likely head to a park by Willow Creek. Or maybe even travel to Forgotten Hollow, a place she had yet to see but nevertheless got the sense she should get herself familiar with. But Elliot went neither of these places. Instead, he walked along the small creek that ran through Newcrest, to a spot where the flat grass sloped down towards the edge of the water. Here, tucked under the crest of earth above it, sat a lovely picnicking alcove, complete with a worn wooden table and grill. Lexi hurried up to the space excitedly, temporarily forgetting the pain in her neck or the churning in her stomach. She set the fruit aside and headed toward a log that surely held some natural treasures inside.

The sun was low, and the late fall breezes felt like nature draping a cool shawl over her shoulders. Not that she wanted to live in nature. But she was happy to visit. 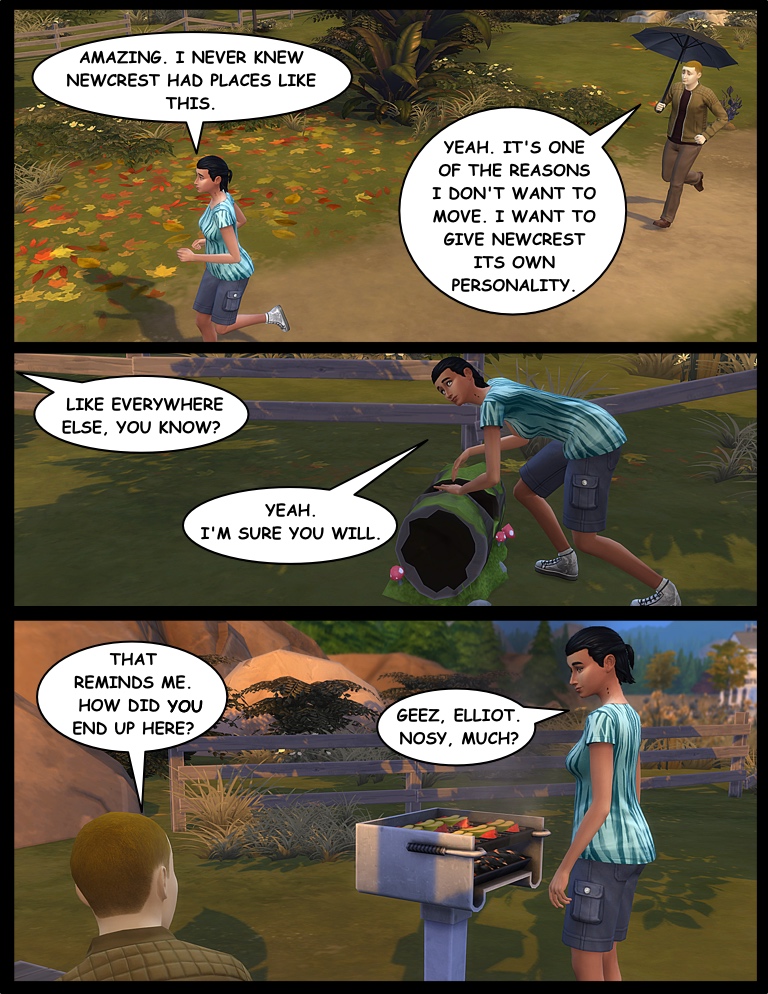 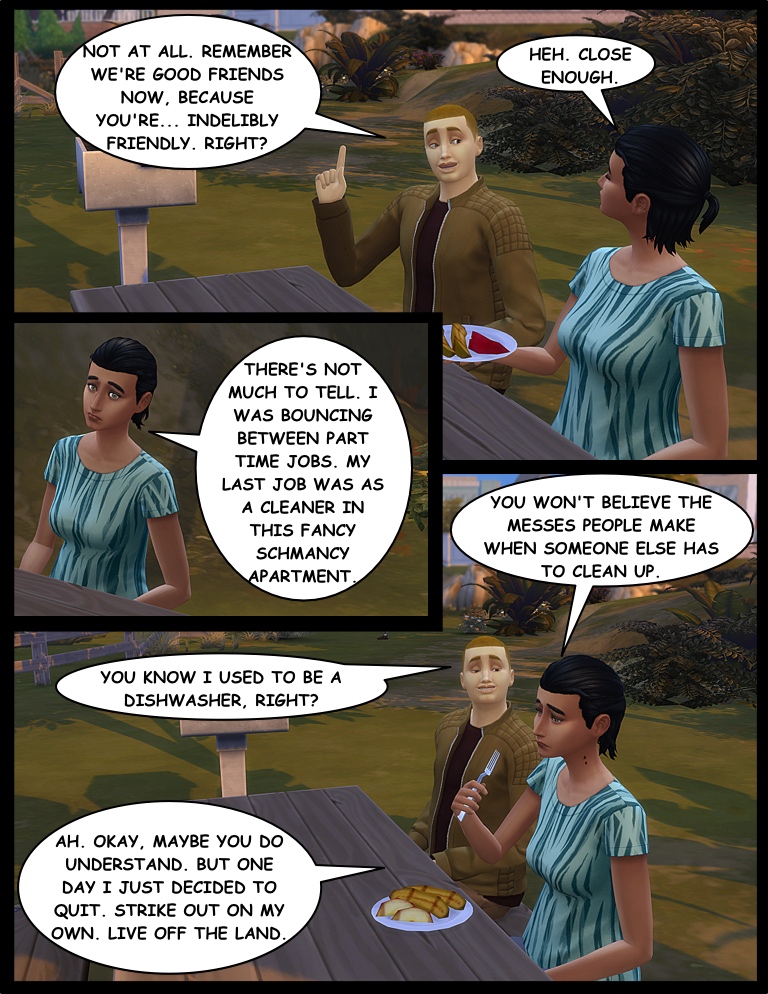 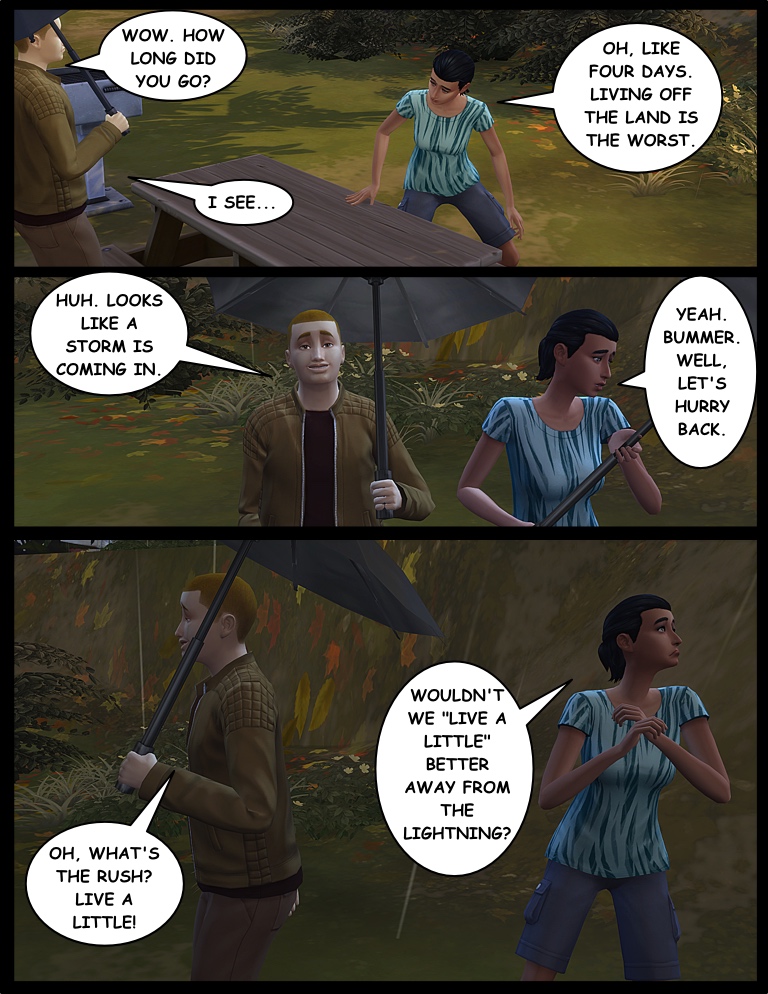 Elliot paid her no mind, an attitude Lexi was more or less used to. Not from Elliot specifically but just from people in general. She considered going back to the house herself. Elliot had hardly ordered her to stay, and anyway, he wasn’t officially her vampire master yet. It was more his words that kept her where she was. This whole decision was about stepping out of her comfort zone, wasn’t it? Being daring? How was she supposed to grow into a powerful vampire if she was afraid of a little rain?

Swallowing her fear, Lexi stretched out her arms. Large droplets plinked off her arms, like… like watery fingers attempting to play Moonlight Sonata on her skin. Or something artsy like that. Lexi laughed and shook the water off, even as more poured onto her.

Lightning struck again, though farther away than before as the storm moved its way through. As if to let the two pedestrians know it wasn’t going quietly, a large gust of wind took a hold of Elliot’s umbrella and wrenched it inside out. Water flew in his face in a most unmastered way, and Elliot looked over the useless object nervously. 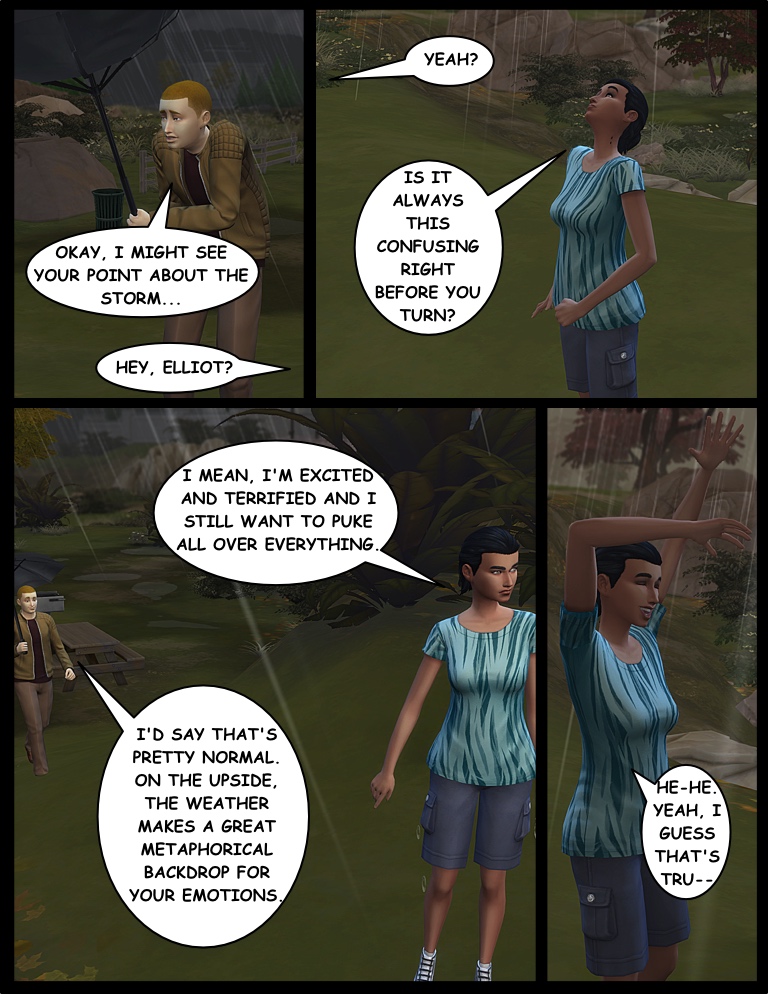 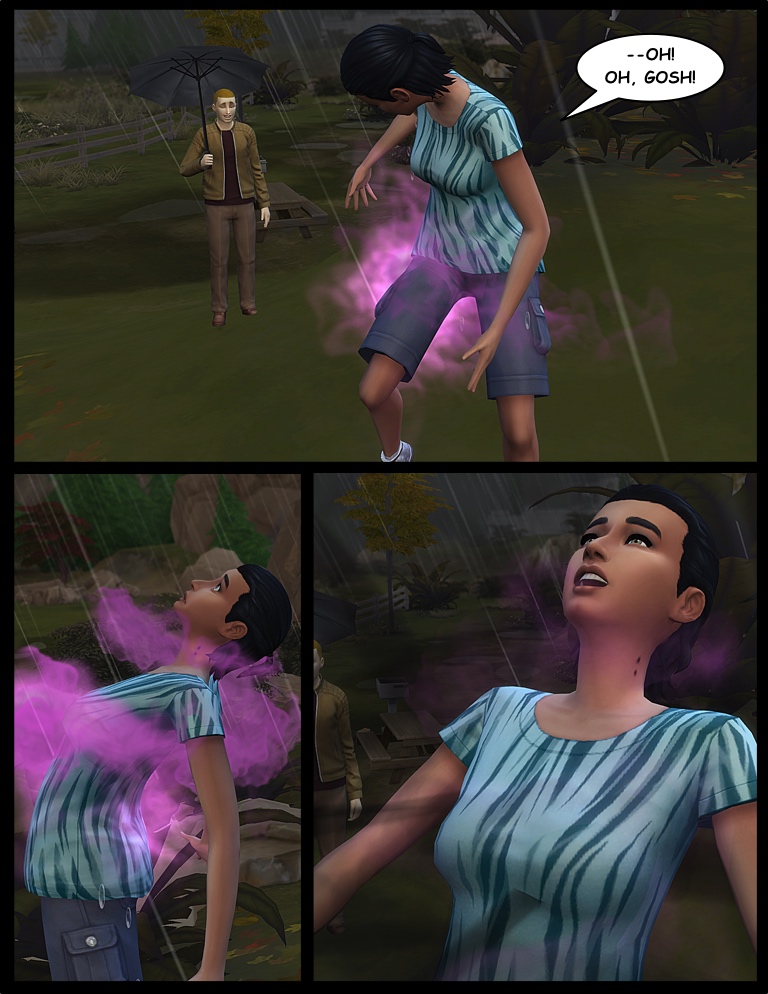 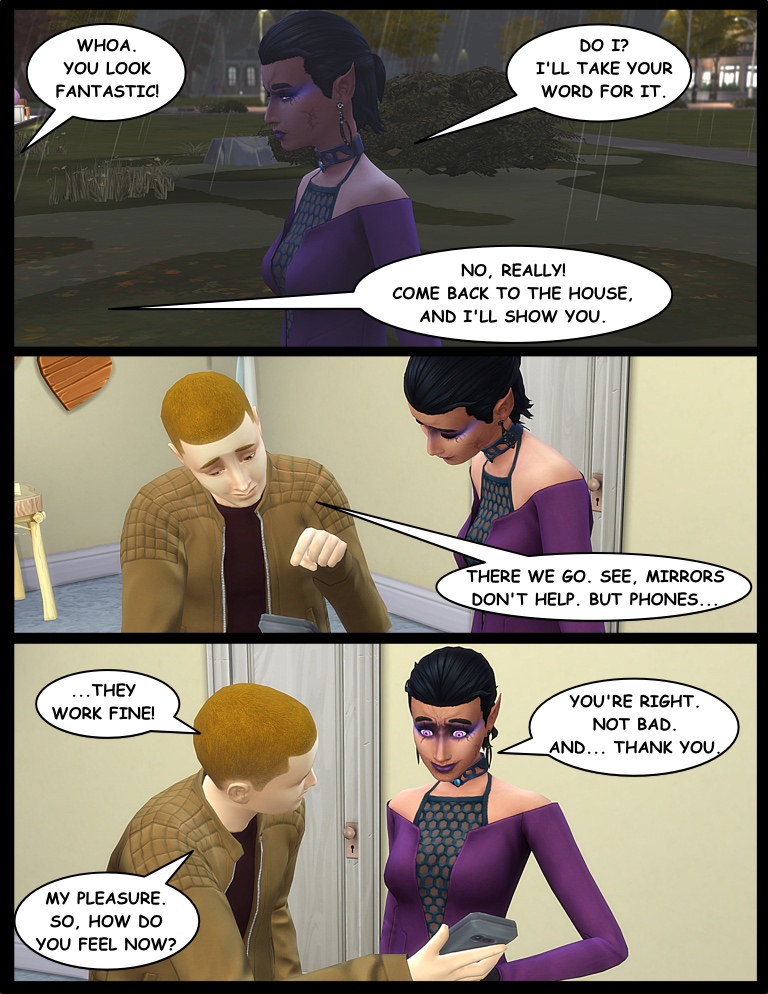 Elliot was touched. Genuinely touched. No one had really done anything for him before out of the sheer niceness of it. Then again, he sensed Lexi had similar life experiences. (Okay, perhaps not sensed so much as overheard when she stated it bluntly.) So here they were. A couple of beaten-down friends who were going to rise to the top. He liked the sound of it.

3 thoughts on “Clanbuilding for Dummies, Chapter 6”